In 2016 the Beagle Club of Western Canada formed a Versatility Committee that worked hard to develop a multi tiered system to be able to award multiple club members an award for their hard work.  The previous system only allowed one member to receive the award based on nominations from the club as they felt fit.  This became harder and harder to award when multiple club members started participating in sport with their dogs.  As the new award system gets geared up you will see more and more members achieving great things with their beagles in the years to come.

Past Versatility Award Winners
(Based on nominations only) 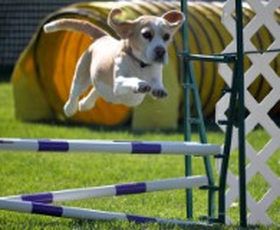 "Clover is my constant companion, who follows me around the yard, and waits at the garden gate for me to come out and play with her.  She loves to cuddle on the couch or lay on the floor at my feet, as I work in my office.

My proudest moment with Clover was this spring when she qualified at the AAC regional competition to attend the AAC Nationals competition.

Clover has a willingness to please attitude and focused work ethic which makes her easy to train."
~ Rita O'Halloran 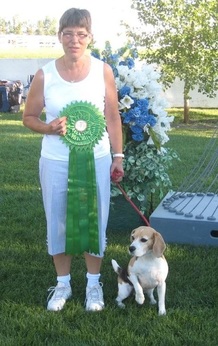 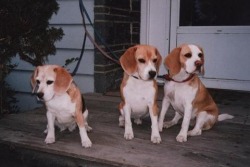 AM. CAN. GCH. MERRY SONG'S HERO OF GOODSIR RN, CGN

Hero was born in Calgary 5 years ago.  His parents were two Merry Song dogs and Mara Baun and Nancy Bergstrom are the co-breeders.  Hero was a 'puppy back' and spent his first year in Texas where he earned his American Championship.

Hero became a returning Canadian in November 2005 when he started earning points for his Canadian Championship.  He finished easily in the spring of 2006, continuing to win the Alberta Hound Association Hound Specialty and the Beagle Club of British Columbia Breed Specialty.  Kyra Dennis piloted Hero to number two and number three Beagle in Canada where Hero accumulated points for his Grand Championship.  In the spring of 2009, Hero earned his CGN and his Rally Novice Title to become the first Beagle in Canada to earn the title of Grand Champion.

Hero is a fun dog and we are proud to be his care takers.  Hero is pictured above (middle) with his two pack members Star (left) and Lulubelle (right). 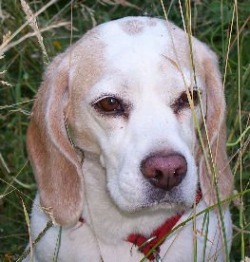 "I am owned by four beagles all of whom I love dearly, but Pricey is my pride and joy.  After Duncan had become the first ATCH Beagle, my goal was for Pricey to follow in her footsteps.  She achieved my goal in September 2007 after 3 years of competing.  She has also earned titles in Obedience and Rally-O and we look forward to her obtaining her Canadian Good Neighbour in the spring. Over the years, she has taught me so much and has such a sweet personality." 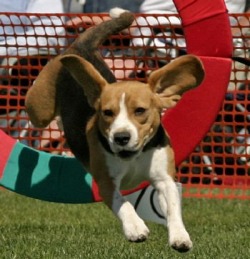 Owned by Rita O'Halloran of Windyhill Beagles in Alberta, Spencer is a Canadian Champion and has his Pre-Novice Obedience title (Spencer will be working on his Novice title this winter), he has his advanced title in the Agility Association of Canada program, and in CKC Agility.  He also has his Jumpers with Weaves Novice Title.